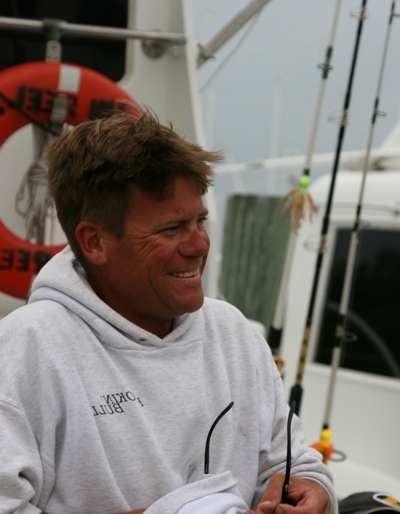 Brady is a Destin native who has been working in the fishing industry here since 1989 when he started as a second mate. He obtained his Captain’s license in 1995 and has been running charters from Destin since that time.  He has worked with Bow’d Up since the 2015 inaugural season (formerly Perfect Shot and prior to that AJ’s Constant Threat) and has skippered this vessel since 2000.  He is consistently regarded as one of Destin’s finest captains and won “Captain of the Year” honors in the 2016 and 2017. He won the same honor in 2008.

Brady has many fishing stories:  There’s the Mako shark that ate the grouper then jumped 20 feet out of the water right off the starboard stern… The big Amberjack that got eaten by the Blue Marlin who then skyrocketed with the jack hanging out of his mouth… The double header Blue Marlin bite at down on the Drillship… Come aboard to hear more of these!!

Brady and his entire family are closely involved with all aspects of Bow’d UP and his wife Pam is the Condo Manager for our beach property.